The Company LABORATORI BALDACCI, established in 1904 by Valentino Baldacci, is one of Italy’s most long-established pharmaceutical companies and is the first pharmaceutical company established in the Pisa area. In more than one hundred years of activity, the company has focussed on partnership and cooperation with university research and industry. In the early 1900’s, Valentino Baldacci invited Professors and Researchers from Pisa University to take part in the study and development of medicines that would undergo specific pharmacological, toxicological and clinical studies before going on sale in Italy. In fact the Company’s motto was: “Primum non nocere, deinde curare”.

From as early on as the 1920’s, Laboratori Baldacci was a well-known pharmaceutical company in Italy, with its original medicines claiming the interest of the medical world and the name Baldacci becoming synonymous with professional expertise and ethics based on a modern approach to issues concerning medicines, their safety and effectiveness. These principles have always been the cornerstone of Baldacci and paved the way for its success in Italy and abroad.

In the years between the two World Wars, the Company began to expand not only in Italy, but in other countries as well, where it set up branches.

In the early 1950’s, Baldacci edited internationally scientific journals such as “Omnia Medica et Therapeutica”, “Omnia Medicamenta”, and “Quaderni della Coagulazione”, in which Italian and foreign researchers published pharmacological and clinical papers mainly on the study of coagulation, platelet aggregation, factors involved in clot formation and lysis. These journals were greatly appreciated by Italian doctors who received free copies and had the chance to further their professional knowledge of the research work carried out at Baldacci and of developments made in pharmacology in those years, presented at international congresses. 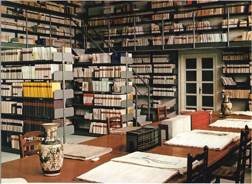 In the same period, the Company’s library containing some 15,000 volumes and subscriptions to more than 250 leading scientific journals was renovated and expanded, to become a benchmark for doctors and university students.

In the first half of the 1950’s Baldacci was busy with its project to expand abroad, setting up a company in Brazil in 1951 and a company in Portugal in 1955, which both went on to become major business concerns, with important effects for neighbouring markets too. In more recent years, when unfortunately most of the Italian pharmaceutical industry had to be sold off to multinationals, Baldacci retained its national identity, still owned by the Baldacci family, united as ever in embracing the philosophy and time-honoured motto of its founder. Like the past, the Company has continued a model of development based on its ongoing commitment to studying new preparations covered by international patents and the production of medicinal products. Research, production and the marketing of prescription drugs are all solidly based on Baldacci’s tradition, and are a challenge for the future, to maintain the high standards of professionalism and strong commitment that have been the hallmark of the Company’s first 100 years and that will take it into the future. In recent years, the company has enriched whith medicinal products and medical devices licensed by other companies as well as nutritional supplements and medical devices created and developed in its laboratories.